Playful Hard-Landscaping in the Born 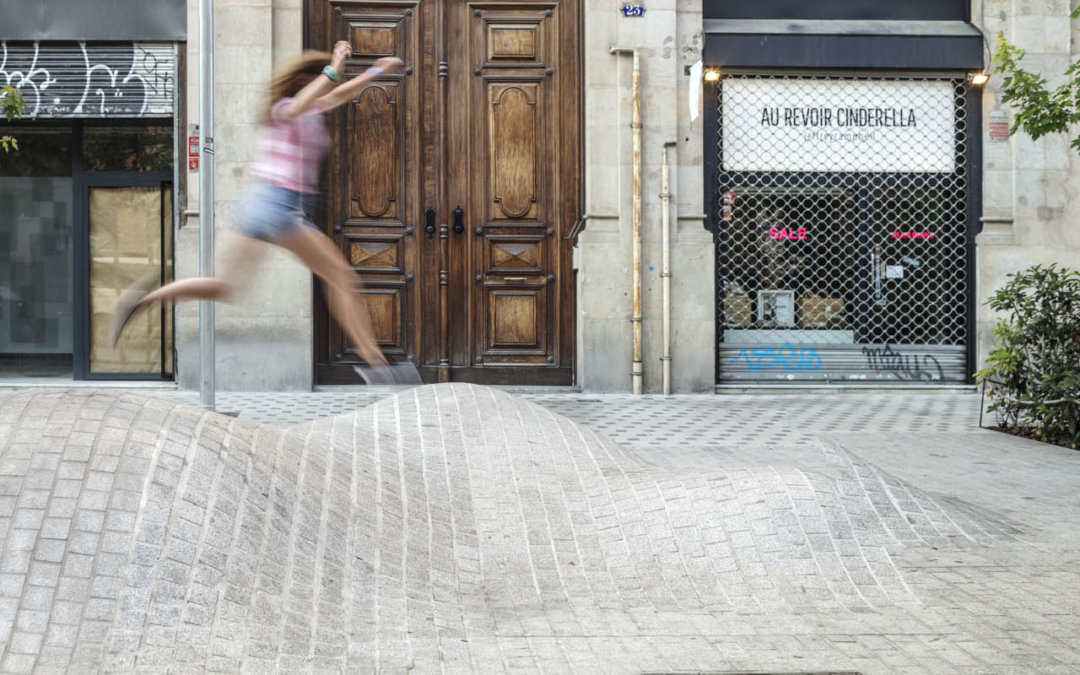 The pavement that we walk on every day can together with other urban furniture, have a huge impact on the way our cities function. Helping to define circulation, separating pedestrian traffic from vehicular traffic, incorporating planting and trees and overall making the city a more pleasant place to be. Now more so than ever we are beginning to appreciate the urban realm and more and more streets are becoming pedestrian friendly. The following urbanisation scheme by Vora Arquitectura is a case in point. The surroundings of the El Born Centre de Cultura i Memoria are treated as a shared space for all city inhabitants. The following description was provided by the architects.

Extension of the hard lansacaping around the Born market in two sections of c/ Comerç, with c/ Princesa street on the one side reaching Marquès de L’Argentera avenue on the other. This extension features material continuity with the given conditions while at the same time creating a contrasting character, deliberately domestic in scale.

C/ Comerç occupies the border between two very different urban fabrics, the medieval city and the Eixample of Josep Fontserè (architect responsible for the Ciudadella park layout). Although similar in character of a typical Eixample street due to its proportions, for most of its layout the streets are asymmetrical with two very different façades.

The surroundings of the Born market have a monumental character related to their proximity to the building. The spaces that converge there (Comerç and the little space between the square in front and the Born boulevard) create a contrast, in terms of character and environmental comfort, a foil to its monumentality with a more domestic feel.

The pavement is made using granite cobblestones, partially recycled, within a single plane, extending the materiality of the market surroundings, and also tracing the layout of the medieval streets with recycled cobblestones. In the area surrounding c/ Princesa the outline of Rec Comtal (meaning medieval ditch) is also recognisable. There we decided to trial a new system of placing smaller cut recycled cobblestones, with wider joints.

Both portions of the street were designed to have a domestic ambience under a dense vegetal canopy defined by trees. The trees are planted to define a strip of services on one side, and in a “random” way on the habitation side, according to the asymmetrical section of the street. This green canopy is reflected on the pavement level with generously sized nursery beds and leafy planters that help to provide colour to the street.

Planters and furniture are systematically grouped together, creating rest areas and places to hang-out. In the side of the França Station there is a large gravel pit that contributes to the general domestic character, as well as providing permeability and comfort under foot.

The centre of Barcelona lacks play spaces. In this case, there was a strong neighbourhood demand for more child friendly facilities, since conventional playgrounds require (building regulations) fencing, and the framing of a border that we didn’t find appropriate given the dimensions of the street, we designed two deregulated playing areas, not subject to the rules of conventional playgrounds. On the França Station side, two traditional games are marked on the ground, with black basalt cobblestones. On the c/ Princesa side, the pavement plane is reinterpreted incorporating undulating folds to generate a stone topography. It becomes a surprise element, a call to the pedestrian to play, to have fun, stimulating the imagination and appropriation by children and adults without dictating a specific way of using it.