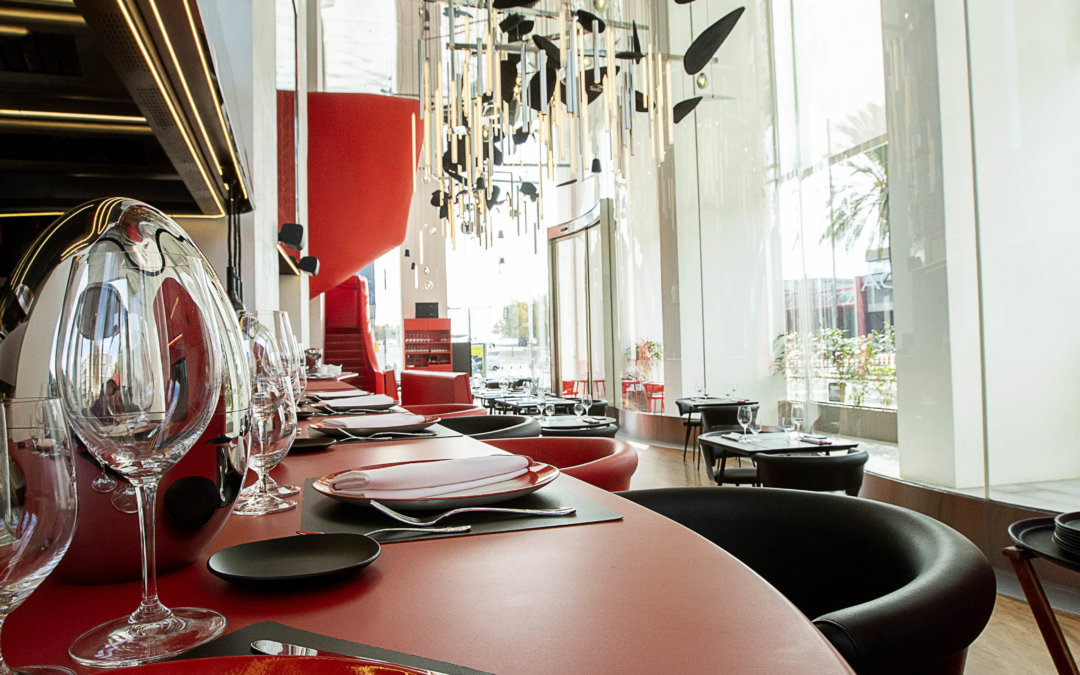 The interior design of restaurants often reflects the nature of the neighbourhoods where they are located. So the Eixample is filled with spaces characterised by their high ceilings, deep plans and classical detailing. When it comes to Barcelona’s Forum / Diagonal Mar neighbourhood the defining feature is light. The interior of Le Grand Café Rouge designed by French architect Odile Decq is inundated with light, an intense Mediterranean light that helps render the bespoke red colour featured throughout.

Strategically located at the base of the torre Antares, a high rise residential tower also designed by Decq, the site is positioned where Rambla de Prim meets Av. Diagonal opposite the Forum, now the Museu de Ciències Naturals de Barcelona. The cathedral like space is occupied by restaurateur Romain Fornell (Caelis, Épicerie, Tejado Mar etc.) who together with chef Franck Radiu has conceived a Franco / Catalan Mediterranean menu. The most striking element of the interior, suitably, is the shade of red, patented by the architect. Used to articulate an amorphous volume in one corner with a staircase that leads to a mezzanine privée.

The overall area measures 400 sq.m. with a capacity for 60 diners inside, there will be a outdoor terrace later this year. The layout features a linear bar counter against the back wall that includes some seating while the rest of the space is organised into banquette seating and loose tables. The already vertiginous ceilings are exaggerated even more with a reflective treatment, 6.5 m in height. A light sculpture that also helps absorb the ambient noise and occupies the enormous void hangs from the mirrored ceiling. Resembling an explosion of shards randomly falling to earth the piece was designed by Decq.

The ground floor façade is enclosed by a gently curved glass wall, a frameless monolithic treatment that creates a sinuous skin wrapping the restaurant. The glass wall soars 6.5 metres in height and refracts the southern daylight that bathes the interior. The glass technology was provided by Cricursa, a Barcelona based company – one of only 3 worldwide capable of manufacturing glass on this scale. Architect Odile Decq cites the craftsmanship and creativity of Barcelona’s workshops like Cricursa with the resolution of the project. A level of craft that is missing (or has disappeared) from Paris, where her practice is based, but which is still available in Barcelona.