CASA SEAT, A home for SEAT in Barcelona 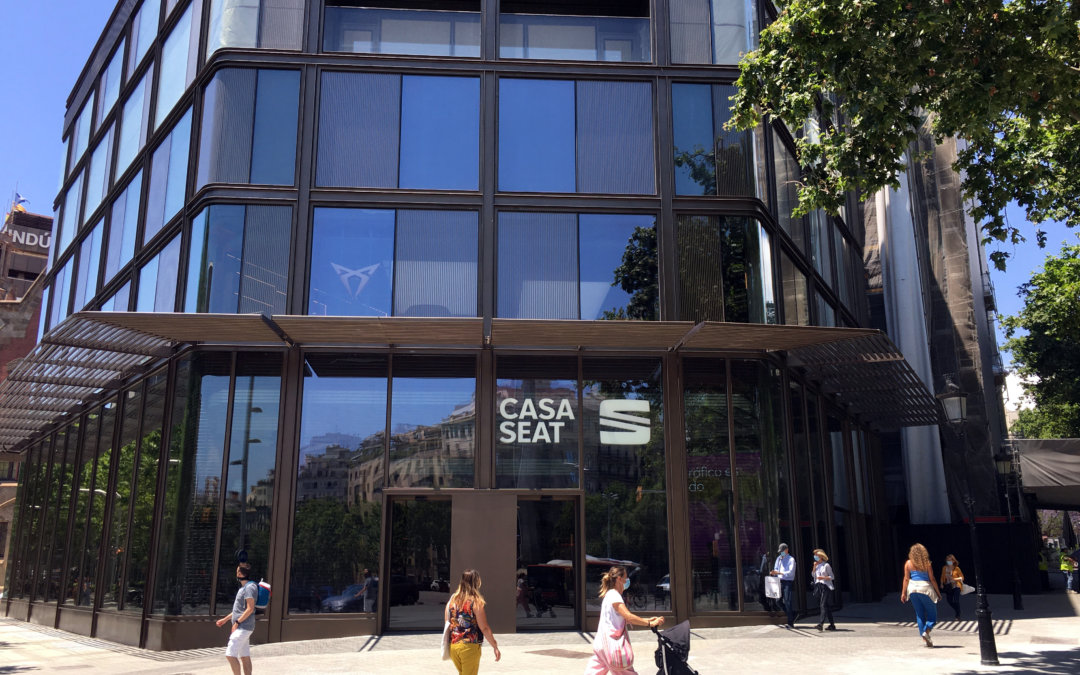 Barcelona city centre is changing at a rate that is perhaps uncomfortable for some and not fast enough for others. The evolving urban landscape with its buildings and well known landmarks is in constant flux. A case in point is the former Deutsche Bank tower on the corner of Av. Diagonal and Passeig de Gràcia, an iconic structure known originally as Edificio Europa which dates from the 1961 measuring 70 m in height, and with 20 floors. The base and tower are now separated and both volumes have a different programme, residential for the 20 storey tower and a showroom and interpretive centre for SEAT and CUPRA its associated brand. This year SEAT marks its 70th anniversary and despite unforeseen circumstances CASA SEAT has opened.

The iconic site which occupies one of Barcelona’s most visible corners, at the intersection of two of its major arteries has now been entirely re-imagined by Carlos Ferrater of OAB (Office of Architecture in Barcelona). The sharp edges have been softened, and rounded, a bronze skin of glass panels some of which have been provided with a tripped metal translucent treatment has been sculpted forming a completely new façade wrapping the original concrete frame structure. Vertical columns expressed on the façade divide the shiny metal and glass surface into a grid of flush panels and set back balconies. The main entrance to CASA SEAT opens onto Jardinets de Gràcia with two separate doors side by side, an indoor and an outdoor. While an independent entrance on the corner of c/ Riera de Sant Miquel provides access to a café / restaurant on the ground floor of Casa Seat. Ultimately when the neighbouring tower is complete a passageway will access the Iglesia de Nuestra Señora de Pompeya on the laneway behind.

Internally the space is dominated by an escalator with glass side panels, Lázaro Rosa-Violán wanted to evoke the insides of a motor engine. Mechanical elements such as the goods lift (where the latest car models are introduced into the building) and ventilation fans are on full view while the central area provides space for the various SEAT car models and electric scooters to be displayed, with islands of seating scattered around. The  escalators lead to a first floor interactive display screen and more showroom space, here for CUPRA while a fully fitted auditorium offering a varied programme of events and talks. The 2,600 square metre space is conceived as a living room for the city, where people are welcome to drop by and participate in a discussion inspired by urban mobility and how we will be getting around cities in the future.

When the next second part of the paired structures is finally completed this corner will become an important landmark once again in the Eixample neighbourhood. It is fitting that part of the precinct should be accessible by the public and given its key location that the theme is connected with city transportation.